A MOSAIQUE OF MEDITERRANEAN CULTURES

Tunisian fashion is an example for a country in transition. Visit to Tunis.
Hemingway loved Couscous, Andy Warhol too. Frida Kahlo preferred houmous and Simone de Beauvoir could not resist Baklawa. The taste of the great intellectuals and artists for Tunisian cuisine are not told in history books, but appear as messages on t-shirts, which became LYOUM‘s trademark, a ready-to-wear brand based in Tunis, founded in 2011 by Claire Ben Chaabane and her husband, Sofiane. The word means « today » in arabic, and its creations are contemporary, universal while being full of Tunisian culture references at the same time.
Natural materials and colours are dominating the bright showroom with the white walls and the large windows in La Marsa, a suburb of Tunis. Those who are looking for neon colors and glitter won’t be successful here. Sofiane Ben Chaabane appears in on one of his own designs to the interview: « Gainsbourg loved Mechouia » says the slogan on his white sweatshit made of cotton.
Inspired by the 100th anniversary of the « Tunis-Reise » made by August Macke, Paul Klee and Louis Moillet in 2014, he and his wife wondered what the painters might have discovered in the Mediterranean country beyond beautiful motives and colors – and what food they might have loved. « The food of a country opens its culture », explains the 36 year old. From reflections about Macke & Co, the way to reflections about other artists and intellectuals wasn’t too far. And this is how Hemingway got his Couscous, Klimt his Kebab and the designer duo its signature style. « They loved Tunisian food » was the title of the first collection for adults, which was their textile breakthrough. After two weeks, it was sold out. Ever since the designs are also online available, there are more and more clients on the other side of the Mediterranean Sea as well.
Claire is not here today, she has to prepare the latest collection. « The Couscous Pop » is the name, the collection will be available in the two shops in Tunis in a few days. This time, the focus is on musicians and pop legends: John Lennon, Kurt Cobain, but also Egyptian singer legend Om Khoulthoum. Sofiane Ben Chaabane makes one thing clear from the beginning: « We did not study fashion design ». The couple met during their studies at a business school in Paris, later on both worked in marketing, he at Saatchi&Saatchi, she amongst others at textile giant Vivarte.
2011, they witnessed the uprising in his homecountry from far away and they did not hesitate for long: « We wanted to contribute to this new start », says Ben Chaabane. So they decided to move to Tunis. After such a long time in France, it was more a start into the unknown than coming back, he says. Same for his wife: « The Arab uprisings were a global experience and inspiration ». Indeed, in 2011 almost the whole world witnessed live on their smartphones how president Ben Ali fell. 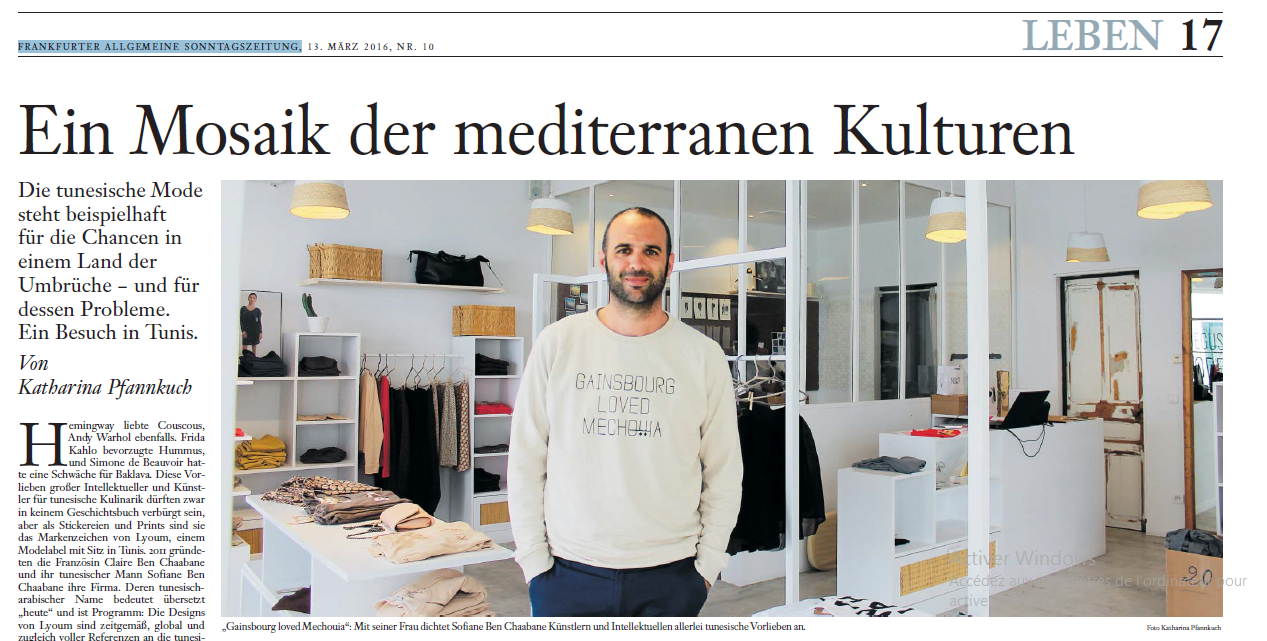 They left Paris, moved to Tunis and founded their label. When Ben Chaabane tells this story, it sounds like the most natural thing to start a new job in a post-revolutionary, politically and economic fragile Tunisia, in a field where both have neither a lot of experience nor contacts in the local scene.
So how did the marketing experts from Paris become fashion designers in Tunis? « We realized very quickly that you do not get beautiful children’ clothing in high quality », says Ben Chaabane. Immediately, his pragmatic side came through: « In this part of the world, children are little kings, people love to buy beautiful stuff for them. So we took on this niche ».
LYOUM started with a children collection, made of cotton, without any kitsch and screaming colors. The decision to produce in Tunisia was also made out of a mix of conviction and pragmatism: They contribute to the Tunisian economy and avoid long deliver ways and complicated logistics.
In the beginning, nobody in Tunis knew the designers. This problem they solved with a – at least for Tunisia – groundbreaking idea: They opened a little bistro in their boutique.  » People don’t buy clothes every day, but they have coffee every day », Ben Chaabane explains the simple yet great idea. Meanwhile, he sits at his desktop, only a large window separates the office from the showroom. Again and again, he waves at clients, the atmosphere is friendly and warm, but never too close. « This used to be the kitchen », he says, suddenly, and laughs.
Only two small salt packages, forgotten between pieces of cotton, examples of patterns and polaroids from fashion shootings, remind that a while ago, tarte tatin and muffins with fraise and ricotta were made here. « I did not learn to be a cook, but the bistro was the best idea I’ve ever had », says Ben Chaabane, again smiling. In the rational marketing vocabulary, this would be called target group marketing, but it is obvious how much the today-fulltime-designer enjoyed this experiment. But since 2015, LYOUM is all about fashion: modern Tunisian clothing which represents the « mosaique of Mediterranean cultures », as Ben Chaabane calls it, but never turns into folk looks. 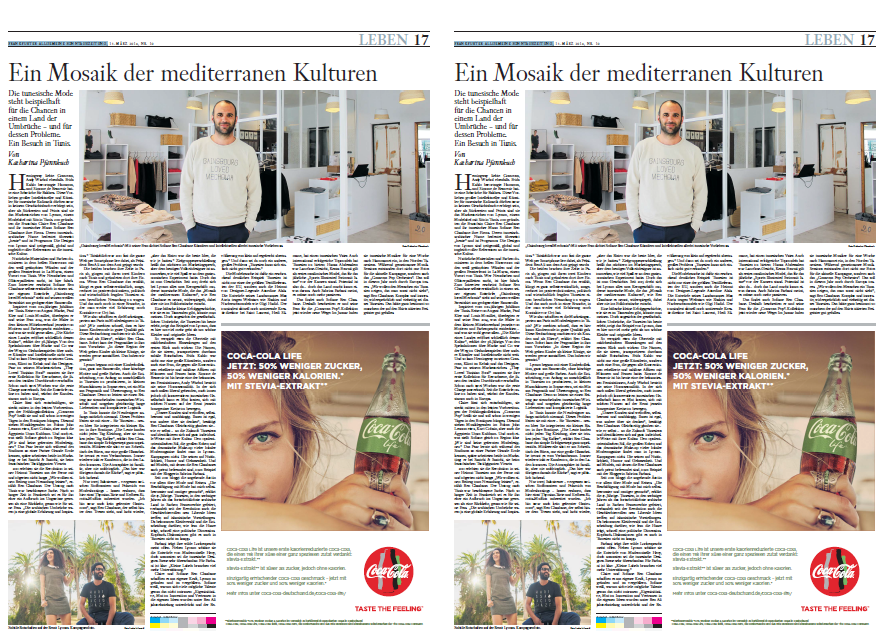 A lovely success story as there are many, one might think now. But taking into consideration the social change of Tunisia, the example of LYOUM shows that this is about much more than about nice dresses and creative ideas. »
As funny and harmless the blouses and might appear on the first sight, the names in the prints transport some subtile messages: Frida Kahlo was not only a great artist, but also a women who broke with social conventions and who had countless affairs with men and women. Simone de Beauvoir is one of the most famous feminists until today. And Andy Warhol never denied being homosexual. Wearing a shirt with a name like that can be quite a statement in a society that seems to be very liberal on the outside but can be very conservative on the inside.
« Our clients are open-minded, self-confident and don’t care what others think of them », confirms Ben Chaabane. At the same time, they appreciate Tunisian culture and integrate it in their daily life – so as he does himself. They identify with their culture. The opulent oriental style and the dramatic make-up which can be seen in some Tunisian fashion magazines is not what you see in LYOUM’s campaigns. They are full of natural and relaxed style. And of models that the designers are friends with. Such as blogger Fethia Sabrina Farhani.
Since 2011, the doctor-to-be writes on her blog about her two passions besides medecine: travel and fashion. « Dealing with fashion made me more self-confident, courageous and stronger », says Farhani.
In the 60s, Tunisia was perceived as one of the most progressive Arab countries in terms of women’s rights. After the uprising, gender roles have been newly debated, liberal and conservative ideas are being discussed. Having this in mind, the choice of how to dress can also get a political dimension. The famous German debates about the veil are taking place in Tunisia as well.
Farhani wears her wild and beautiful curls open. Besides LYOUM, she likes the designs of Mademoiselle Hecy, for example. But there aren’t too many small labels in Tunisia to talk about. Farhani is convinced: « Smaller labels need more support ». 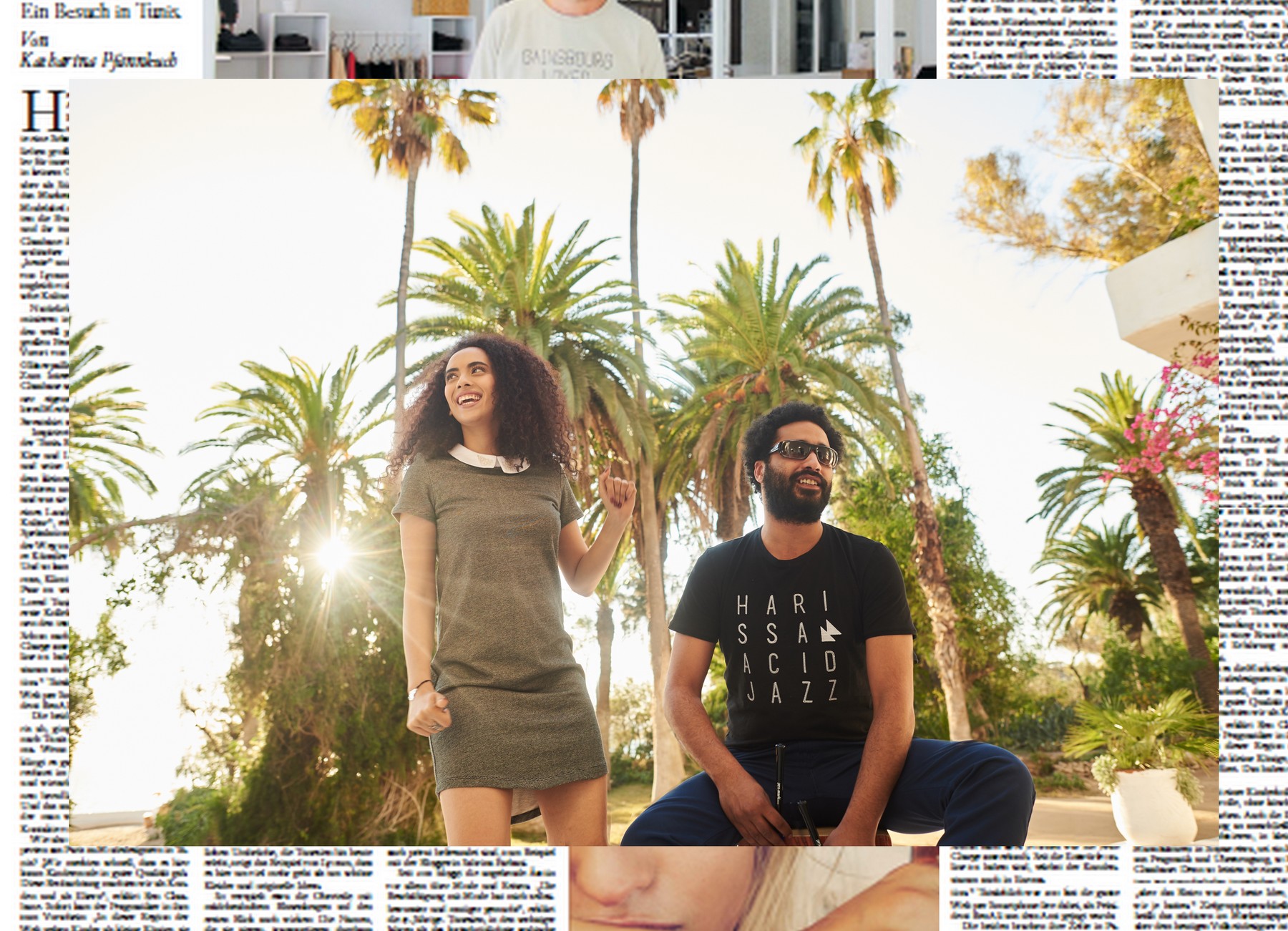 Claire and Sofiane Ben Chaabane made it without support to found and to expand their label. Sofiane explains why so many potential talents are afraid to take the first step: « Self-confidence, trust in your own ideas, joy of innovation – this was oppressed here under the old regime ». And there is another problem, he says : « Tunisia does not know to sell itself good ».
The fashion industry is an almost shockingly good example for that: Tunisia is not only amongst the biggest textile suppliers to the EU, but also home country to designer legend Azzedine Alaïa. The designs of his fellow Max Azria are to be seen on stars such as Shakira and Gigi Hadid. Hedi Slimane has a Tunisian father, and the country has also international top-models: Hanaa Abdessalem was the face of Lancôme, Kenza Fourati appeared in Sports Illustrated. There is a lot of history and potential – but the country does almost make nothing out of it. Farhani agrees that more has to be done.
So does Ben Chaabane. This is why he and his wife decided to go new ways again for the up-coming « Couscous Pop »-collection. In January, they invited Tunisian musicians to a house in Hammamet and spend a week there with jam- and photo-sessions. This is how the current campaign developed and how the « Couscous Pop » was born which will be touring Europe later this year. « We want to show a Tunisia that people usually do not see », says Ben Chaabane. Complex and innovative, full of contradictions and diverse – this is how Tunisia is. No doubt that many of the famous people and freethinkers quoted on LYOUM shirts would have loved this.

All you need to know before heading to Incredible India